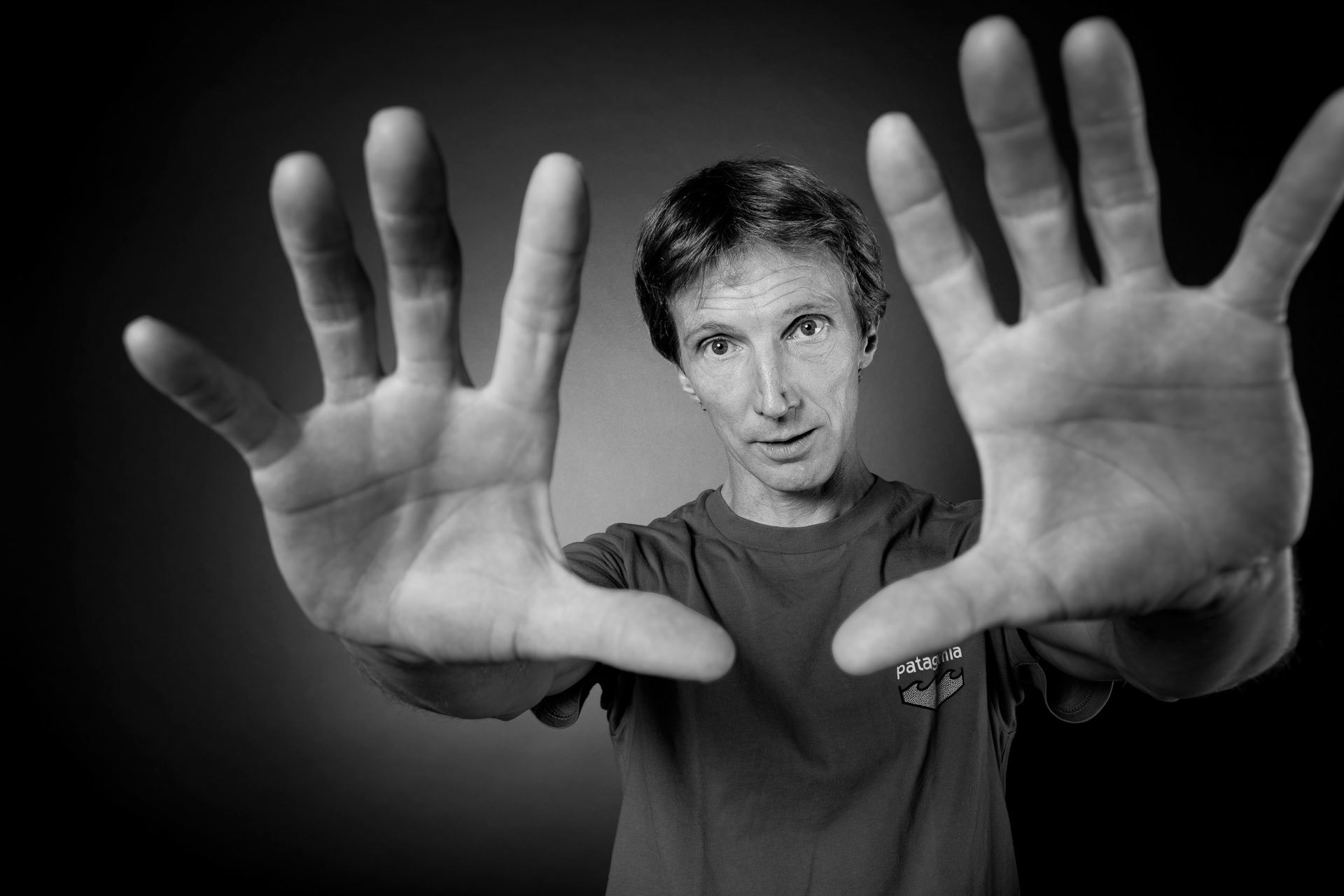 THE EXPLORER
ARNAUD PETIT
France
The French climber, author and mountain guide Arnaud Petit is known around the world for his first ascents and big wall climbs in remote areas. After enjoying a successful career as a competitive climber (1996 World Cup winner, European Lead Champion), he decided to dedicate himself fully to rock climbing. Together with his wife, Stéphanie Bodet, Arnaud loves to travel the world in search of impressive lines and untouched walls. The couple live in a small house that they built underneath the famous crag of Céüse.
SHARE:

"Developing routes enables me to turn my dreams into reality and to bring my imagination to life. You could say developing is like a separate, unique kind of sport, in which we are allowed to invent the rules and design our own playing field."

Do you prefer climbing or developing routes?

I prefer developing routes. In fact, I would even say that I’m extremely passionate about this adventurous activity. I’ll always take immense pleasure in opening new and even easy multi-pitch routes. When I repeat routes that already exist, I don’t feel the same spirit of discovery or adventure.

Why is this activity so important to you?

Developing routes enables me to turn my dreams into reality and to bring my imagination to life. It’s a fantastic opportunity. There are not many fields that give you the chance to visualize the most beautiful thing in the world and then to actually try and create it. But this is exactly what developing climbing routes enables you to do.

I also love the fact that we developers have nothing to measure ourselves against. There’s no direct means of comparison like there is with climbing. When you climb, it’s always connected to the difficulty rating, whether the route is challenging, whether you’re in shape or whether you used to be a better climber. Even when you’re working hard to improve yourself, situations like this arise time and time again when climbing.

But when you’re developing a route, the level of difficulty is of secondary importance. Instead, the overriding aspect is to find a wonderful line, to follow it and to ensure that the bolts are correctly put in place. You concentrate so intently on these aspects that you forget about everything else. Developing routes is my passion. It fulfills me completely and makes me happy.

How long does it take you to develop a route?

Time has very little bearing on what I do. As I’m doing something I love, I wouldn’t wish to do anything else. When I’m developing a sport climbing route in Céüse, where the rock is very clean, I probably need three to six hours. However, it’s more important to find a good line that doesn’t run too closely to the other routes. Sometimes it’s better to think about it overnight and to come back to it the next day.

Time is of particularly little relevance when developing multi-pitch routes. On occasions, this can take as many as five or even eight or nine days. I like to be left to work in peace and to carry out my work with great care. Having no yardsticks against which to compare myself means that I can take my time. This gives you a fantastic sense of freedom.

You teach climbers how to bolt routes and share your knowledge by leading courses?

I try to share my passion for developing routes with others because I believe that this activity is essential for our sport. Young climbers especially are accustomed to finding routes ready and waiting for them. But climbers are improving and without development activities they would have nothing new to explore.

Developing is tough at first and requires a lot of hard work. It’s nothing like training – in fact it’s quite the opposite, as it gives you backache. But once you start you get hooked on the sense of discovery and don’t want to stop. You could say developing is like a separate, unique kind of sport, in which we are allowed to invent the rules and design our own playing field.

What’s more, the upkeep and restoration of routes will become increasingly important in the future. Many areas in Europe were developed around 25 to 30 years ago, which makes them rather old. A lot of them need repairing and this requires the support of all climbers.

I believe that all climbers are responsible for taking care of the climbing sites. Furthermore, they should all be capable of assessing the quality of the bolts. Taking personal responsibility is part of climbing because our pursuit is more than just a sport.

Do you feel that developers receive enough recognition from the climbing community?

A desire for recognition is not necessarily the right attitude for anyone looking to bolt routes. To do this job, you really have to enjoy it. If you are passionate about it, you’ll achieve good results because you’ll want your work to be perfect for your own sense of satisfaction.

Sometimes routes are developed too quickly, simply by bolting lines into walls from left to right in an almost industrial manner with the goal of creating a sports facility and attracting attention to yourself.

The same happens on multi-pitch routes and in mountaineering. Everyone wants to make the first ascent. For me, however, it’s not about building a name for myself. When I open a route, I’m much more excited about having the privilege of exploring the rocks and potentially climbing the most magnificent pitch I’ve ever uncovered. That’s the most important thing.

You’re very well-traveled. Which climbing area has impressed you the most?

The Taipan Wall in Australia. The Biographie wall in Céüse is also exceptionally beautiful. I’ve never been to Smith Rock, but I imagine that it is also very impressive, very vertical and smooth. Taipan Wall in the Australian Grampians is a breathtaking orange cliff. Since the crag is also very smooth, it isn’t covered in climbing routes. There’s a lot of space, a bit like on Biographie.

What do you believe the future holds for climbing and climbing gardens?

I am very optimistic about the future. More and more climbers are interested in trad climbing, meaning that new routes are constantly being developed. I’m pleased that adventurousness and creativity are back on the menu. Traveling is becoming easier, meaning that we will keep discovering new areas.

On the other hand, I believe that the restoration of routes opens up a whole world of potential. This, too, allows you to unleash your creative side, as sometimes old routes can be improved by repositioning the bolts and slightly altering the line if necessary.

Do you have a special relationship with the routes you have opened? Do they stay etched in your mind?

Yes, I do remember certain things. Interestingly, it’s always the minutest of details that I recall. Developing a route is one thing, but then I also climb it. I may remember a small piece of rock, a shape that I touch for the first and then a second time or perhaps a tiny flower at the belay station. It’s strange, but when I think back to this route at a later date, it’s these little details that come to mind. The entire process is very sensory. My wife, Stéphanie, and I say that in climbing “you focus on the infinitely small as part of the infinitely big” – the infinitely big being the world.

Is it important to you to give routes a name?

That’s not of great concern to me. However, a route that’s destined to become a world-famous classic shouldn’t be given a joke name. I wouldn’t, for example, give a beautiful line with ten pitches in a remote canyon in Morocco a name such as “Big Boob”. If you choose a name like this, I think you miss a vital part of the experience and the relationship you develop with the place and the locals. I like it, for instance, when the name refers to the place in which the route is located.